Mark your calendars! Sept. 22 is One Chicago night, as Chicago Med, Chicago Fire, and Chicago PD all return to our screens.

Chicago Med’s first episode of the season is “You Can’t Always Trust What You See” and although we are still awaiting some official log lines* to go along with that intriguing episode title, we do have 22 brand new official photos from the premiere episode to share below.

From Emmy Award-winning executive producer Dick Wolf (the “Law & Order,” “Chicago” and “FBI” brands), Chicago Med is an emotional thrill ride through the day-to-day chaos of the city’s newest state-of-the-art trauma center and into the lives of the courageous doctors, nurses and staff who hold it all together.

Dr. Will Halstead (Nick Gehlfuss) finds his career as an emergency medicine physician in jeopardy, following his cover-up involving a serious ethics violation. Dr. Daniel Charles (Oliver Platt) remains the Sherlock Holmes of psychiatry. Sharon Goodwin (S. Epatha Merkerson), the venerable head of the city’s largest hospital, is under intense fiscal scrutiny to preserve the bottom line while continuing to ensure that all patients receive nothing short of quality care and compassion. Dr. Ethan Choi (Brian Tee), a former Navy flight surgeon and chief of the E.D., begins the season in recovery mode after being shot by a former patient. Now it’s up to the blunt but talented Dr. Dean Archer (Steven Weber) to show what he’s made of as interim chief  at the helm of Chicago’s trusted and busiest ER. Maggie Lockwood (Marlyne Barrett), the charge nurse and eyes, ears and brain of the ER, is skilled and confident but finds herself dealing with profound family issues of her own. Ace surgeon Dr. Crockett Marcel (Dominic Rains), the New Orleans-raised surgeon with a breezy manner, has finally started to let his guard down, earning the respect of his colleagues. And now two new doctors have joined the E.D. family. Dr. Stevie Hammer (Kristen Hager) is a brilliant, scrappy emergency medicine doctor with a surprising past and Dr. Dylan Scott (Guy Lockard) is an ex-cop who’s doing a dual residency in emergency medicine and pediatrics.

Together they will confront Chicago’s most critical medical cases and challenging ethical dilemmas with courage, compassion and state-of-the-art treatment. Inspired by ripped-from-the-headlines cases, Chicago Med will weave cutting-edge medicine with the personal drama that comes with working in such a high-intensity environment. Through it all, familiar faces from Chicago Fire and Chicago P.D will intertwine with Chicago’s finest medical heroes.

* We have added the official log lines for the episode below:

Will Halstead returns to Med to help Goodwin with a secret investigation.

Archer and Charles deal with twins who insist on being identical inside and out. 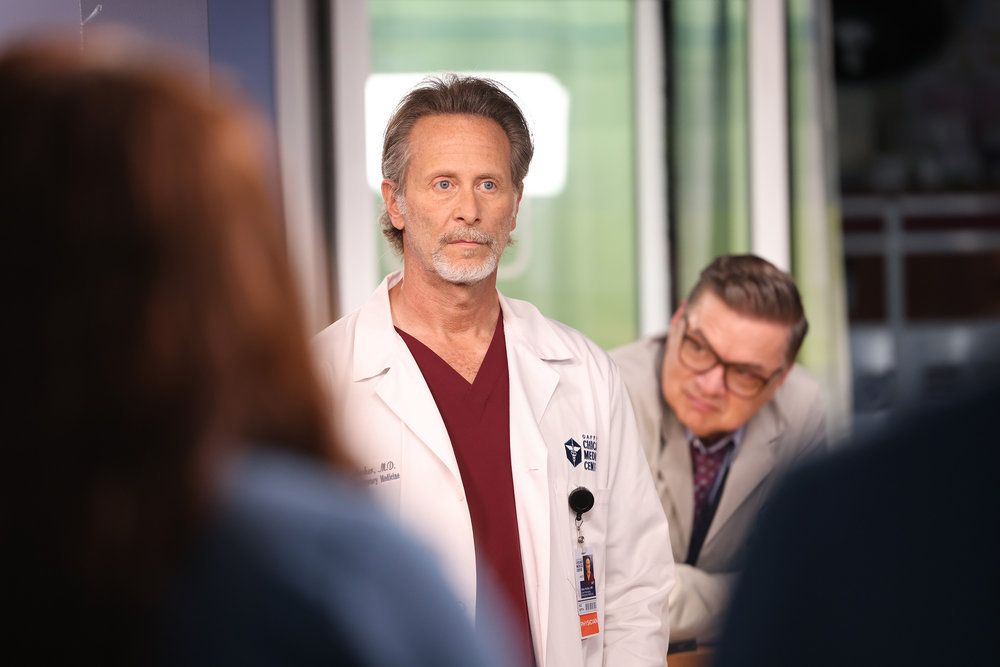 Chicago Med Episode 7×18 “Judge Not, For You Will Be Judged”

Chicago Med 7×16 “May Your Choices Reflect Hope, Not Fear” Photos