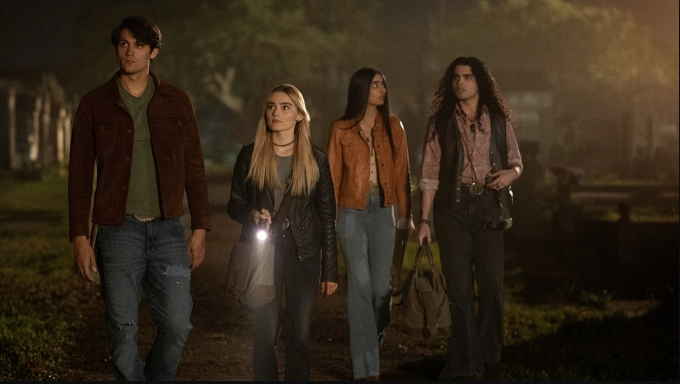 It’s Sept. 12. The embargo has been lifted and we are finally finally able to talk to you guys about the Supernatural prequel series The Winchesters without fear of being dragged to Hell for our hasty enthusiasm.

Born from an idea by Jensen Ackles, his wife Danneel Ackles and Supernatural writer Robbie Thompson, this hopeful new contender takes us back to 1972, when Dad met Mom. That is to say when John Winchester (Drake Rodger) met Mary Campbell (Meg Donnelly), and learned that the sleepy town of Lawrence, Kansas hides a dangerous world of monsters, demons, hunters, and even some dudes who go by the name Men of Letters.

If you’re hyped for the new series, then you may already know the story of John and Mary Winchester is told from the perspective of their son Dean (Ackles), who narrates their adventures journal-style, and even appears via flash forward in the premiere episode.

Dean begins his deep dive into the past with Dad’s return from the Vietnam war. We discover John is a young man haunted by his past — not only by the events of the war (he may or may not be seeing his dead war buddy on occasion), but also by the figurative ghost of his own father who walked out on he and his mother some years ago, never to be seen again.

When John receives a mysterious letter explaining the real reason for his father’s abrupt exit (no spoilers) he makes his way home to reconnect with his mother and to try to make sense of what he has learned. Along the way (again no spoilers!) he encounters an angry young woman by the name of Mary Campbell who opens his eyes to the world of demons and hunters.

We discover that Mary is a capable hunter who has grown up learning how to hold a knife before she could run (we’re not so sure that’s good parenting actually), and although she may have a small group of loyal friends (more on those guys in a moment) she is not out to win friends or influence anybody, least of all the clueless and inexperienced John Winchester.

As John and Mary become drawn together by fate and circumstance, (Mary’s father has also recently disappeared: We understand how and why in the premiere’s Indiana Jones-esque opening scene), the irony is not lost on John that he travelled half way around the world, and even enlisted in the army trying to figure out why his father left, only to discover the truth was here in Lawrence all along.

As mysteries point to answers, and answers point to further mysteries, John and Mary, along with Mary’s two hunter friends, flamboyant Carlos (scene-stealer Jonathan “Jojo” Fleites) and the bookish and nervous Latika (Nida Khurshid) pool their skills and knowledge, and set off together in their VW van, filled with demon slaying kit, to save the world. One Dad at a time.

It’s here that we discover the true heart of the show: a Scooby Gang of distinctive, clearly drawn characters, each with their own strengths and foibles, pitching in and learning as they go, or as Dean more eloquently writes: “Piecing together how looking for their fathers brought them together, and how that put them on a mission to save the world and led them to becoming a family.”

And although John and Mary’s romance may be not a thing right now — in fact John spends more time making eyes at Latika than Mary in the pilot episode — we can see that shared traumas, a similar mindset, and sense of humor will eventually bring them together at some point in the future.

But what about the tone of the show? Is it Supernatural 2.0? A hybrid? Or something entirely different? And what will devout SPN fans, eager to see more of what they are used to, ultimately think of The Winchesters? Our opinion leans strongly towards it being something entirely new but with loving callbacks to the original show, which we are sure the writers will continue over episodes to come, because frankly they’d be crazy not to. (In one scene Mary shouts “Go home, Soldier Boy” to John, in what can only be a wink and a nudge to Jensen Ackles’ role in Eric Kripke’s Prime Video series The Boys.) Similarly, the lore and mythos of demon hunting, hunters, weaponry, the men of letters, and some trademark witty banter have all been re-baked into the fledgling show’s DNA. Those tuning in for an hour of supernatural mystery solving and demon slaying will no doubt be satisfied by what they see. Those tuning in only to catch a glimpse of Jensen Ackles as Dean Winchester may suffer a law of diminishing returns as the season progresses.

What is different of course is the cast, and the fact the show chooses not to focus on two lone wolf brothers, but a group of friends learning how best to have each other’s backs. The Impala is now a VW van, and the year is 1972, and that’s ok. While this “Scooby Gang” format is new, that’s probably for the best. Casting two unknowns in a similar format to Supernatural and hoping to recreate that Sam and Dean lightning in a bottle chemistry would be a risky gamble, especially without rainmaker and Supernatural series creator Kripke on board, and also given how ardently fans feel about OG’s Ackles and Padalecki.

Instead, The Winchesters forges its own path. And it does so confidently and with optimism and charm. The fact it does so with Supernatural writers and actors on board is a distinct advantage. Whether this new show can stand out from the CW’s stable of returning Fall teen dramas is not just up to its creators and producers, but ultimately to those who choose to tune in and support it. For our part we feel there is much to like here, and great potential for the show to run and run.

Follow us @TVPulseMag for more Winchesters scoop this TV season.

The Winchesters 1×08 “Hang On To Your Life” Photos

The Winchesters 1×06 “Art of Dying” Photos

The Winchesters 1×05 “Legend of a Mind” Photos