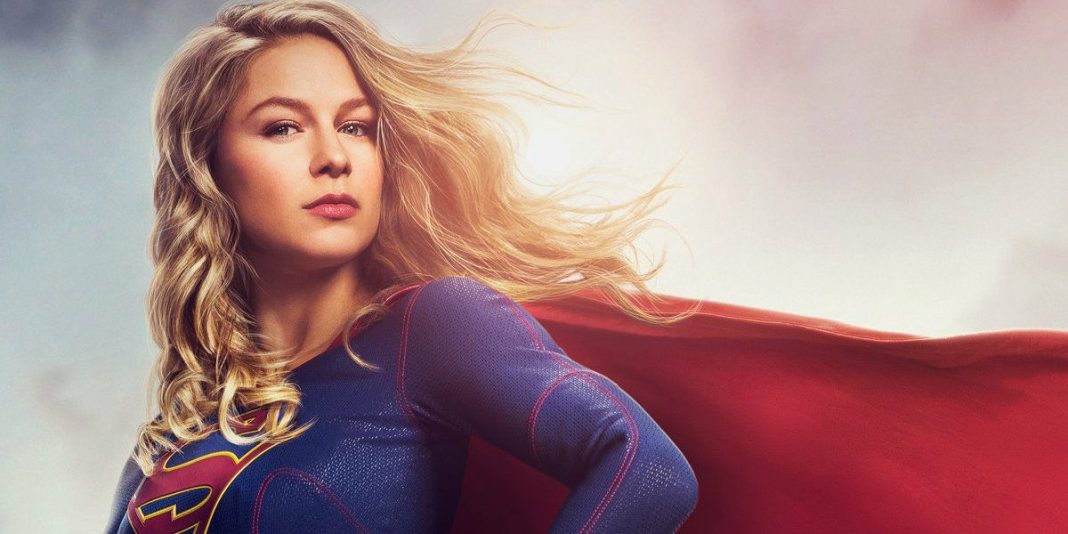 Supergirl (Melissa Benoist) is determined to keep everyone safe from Lex (guest star Jon Cryer) and Nyxly (Peta Sergeant) so she doubles down on patrol, especially as Alex (Chyler Leigh) and Kelly’s (Azie Tesfai) bachelorette party is coming up.

Alex is torn between duty and finally allowing herself the time to enjoy her new family.

The episode was directed by David McWhirter with story by Karen E. Maser and teleplay by Emilio Ortega Aldrich & Elle Lipson.

Episode 6×17 “I Believe in a Thing Called Love”

When Lex Luthor (guest star Jon Cryer) appears by Nyxly’s (Peta Sergeant) side, Supergirl (Melissa Benoist) and team must deal with the emotional fallout of facing their two biggest foes at the same time.

Alex (Chyler Leigh) makes plans for the perfect proposal to Kelly (Azie Tesfai), but work keeps getting in the way.

The episode was directed by Jesse Warn and written by Dana Horgan & Nicki Holcomb.

Photos: “I Believe in a Thing Called Love”

Kara (Melissa Benoist) lands her dream story for Catco but when the city is suddenly attacked by a nightmare monster at the same time as her interview, she is forced to take a serious look at her life and decide if she can continue to live as both Kara and Supergirl.

As Dreamer (Nicole Maines) takes the lead on the search for the Dream Totem, which can vanquish they nightmare monster in National City, she realizes she needs to ask her sister Mauve (guest star Hannah James) for help.

The episode was directed by Eric Dean Seaton written by Rob Wright and Jess Kardos.

The episode was directed by Tawnia McKiernan with story by Robert Rovner and teleplay by Emilio Ortega Aldrich & Nicki Holcomb.

William (Staz Nair) struggles to write a story on the Super Friends that makes both the heroes and Andrea (Julie Gonzalo) happy.

The episode was directed by Simon Burnett and written by Karen. E. Maser & Derek Simon.

SUPERGIRL MUST PASS THE TEST OF COURAGE

Supergirl and Nyxly battle and each get a piece of the totem but learn the first person to pass the test of courage will gain control of the entire thing.

The episode was directed by Tawnia McKiernan with story by Dana Horgan and teleplay by Jay Faerber & Brooke Pohl.

Kelly (Azie Tesfai) is horrified when the Ormfell building implodes, injuring many in the community, including Joey (guest star Aiden Stoxx). However, her horror quickly turns to frustration when she realizes that the hospital is overwhelmed, people are getting sicker, and no one is coming to help – including Supergirl (Melissa Benoist) who is busy fighting Nyxly (Peta Sergeant).

Knowing that she can make a difference, Kelly embraces her power and fully steps into her role as Guardian.

The episode was directed by David Ramsey and written by J. Holtham & Azie Tesfai.

Mxy returns and explains Nyxly’s dark history to the super team in the best way he knows how – in song form.

Meanwhile, Lena (Katie McGrath) visits her mother’s birthplace in Ireland, eager to dig into her past but is shocked by the small town’s icy reception towards her.

The episode was directed by Glen Winter with story by Rob Wright and teleplay by Elle Lipson & Chandler Smidt.

Photos: “Mxy in the Middle”

NIA SPENDS TIME WITH HER MOM

Supergirl (Melissa Benoist) intervenes when a building in the Heights that was set aside for low income housing is suddenly at risk to be sold to a major corporation.

The episode was directed by Jesse Warn with story by Jess Kardos and teleplay by Nicki Holcomb & Jen Troy.

SUPERGIRL AND KELLY TEAM UP

Kelly (Azie Tesfai) meets Joey (guest star Aiden Stoxx), a young orphaned alien boy, who is acting out in foster care because he fears there is something wrong with his brother Orlando (guest star Jhaleil Swaby), who is incarcerated.

Kelly asks Kara (Melissa Benoist) to help her investigate and they stumble upon abuse at the prison.

Meanwhile, Nyxly (Peta Sergeant) crashes one of Nia’s (Nicole Maines) dreams and asks her for help.

The episode was directed by Shannon Kohli and written by Karen E. Maser & Emilio Ortega Aldrich.

As Supergirl (Melissa Benoist) and Zor-El (guest star Jason Behr) make their return to National City, they are determined to keep the Phantom Zone behind them and enjoy being superheroes together.

The episode was directed by Armen V. Kevorkian and written by Dana Horgan & Jay Faerber.

As the Super Friends brave the Phantom Zone to bring Supergirl (Melissa Benoist) home, each member of the team is confronted by visions of their worst fear.

Part two of the flashback episodes pick up where things left off – Young Kara (guest star Izabela Vidovic) experiences kryptonite for the first time, Nia (Nicole Maines) and Brainy (Jesse Rath) are trapped by invading aliens, and a young Cat Grant (guest star Eliza Helm) may be the reason Supergirl never gets out of the Phantom Zone.

THE FLASHBACK TO MIDVALE INTRODUCES A YOUNG CAT GRANT

Nia (Nicole Maines) and Brainy (Jesse Rath) attempt to save Supergirl (Melissa Benoist) from the Phantom Zone by time traveling back to Kara’s home in 2009.

While determined to secure the item needed to help Supergirl, Brainy is worried about keeping a low profile so as not to alter the future timeline.

However, when their ship crashes upon arrival, a young Kara Danvers (guest star Izabela Vidovic) is the first on the scene.

Meanwhile, a young reporter named Cat Grant (guest star Eliza Helm) sets her sights on Midvale as she suspects there is a big story in the small town.

Supergirl (Melissa Benoist) finds an opportunity to escape from the Phantom Zone but it comes with some dangerous strings attached.

Meanwhile, Lena (Katie McGrath) joins the Super Friends on a mission but finds she disagrees with their plan of action against the Phantoms and wonders if she is truly ready to be a part of the team.

As the stakes with Lex (Jon Cryer) are raised higher than ever before, Lena (Katie McGrath) must decide how far she is willing to go to stop her brother.

Meanwhile, Supergirl (Melissa Benoist) and the team are faced with a challenge unlike anything they’ve ever dealt with before and it brings Alex (Chyler Leigh) to her breaking point.

As Brainiac (Jesse Rath) lays close to death after trying to stop Lex (Jon Cryer), Supergirl (Melissa Benoist) and team soar in to save him, engaging in an epic battle with Gamenmae (guest star Cara Buono).

After beating Leviathan, Supergirl turns her attention to Lex (Jon Cryer) who has used the Obsidian platform to brainwash half the world to love him and follow him at all costs, no matter what horrible things he does.

Knowing how dangerous this makes her brother, Lena (Katie McGrath) enlists the entire team – Alex (Chyler Leigh), J’onn (David Harewood), Dreamer (Nicole Maines), Kelly (Azie Tesfai) and Brainiac – to help, but Supergirl realizes that the only way to truly stop Lex is to sacrifice herself.

Supergirl 6×17 “I Believe in a Thing Called Love” Photos